Heidi Houston doesn’t back down to a challenge.

Not long after it was released in 2010,  we had an opportunity to attend a screening of her award-winning documentary Hot Flash Havoc here in Chicago. It was enlightening. The film not only set the record straight about hormone replacement therapy and the confusion surrounding the Women’s Health Initiative (WHI) study, it also offered a revealing and entertaining look at menopause.

In early 2016, the documentary was updated and released through local PBS stations across the United States.

We recently caught up with Executive Producer Heidi Houston, a true influencer and the driving force behind Hot Flash Havoc. Heidi shared her thoughts on how the conversation about menopause is changing and why her mission is so personal, as well as details on her latest project, Menopause Talks. 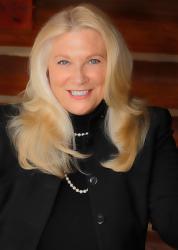 Heidi, it’s been over four years since the initial release of Hot Flash Havoc. What, if anything, has changed within the medical community or in how women relate to their doctors? Do you sense that we’re having candid, more open conversations about menopause?

What is interesting is that the new studies only emphasize how much women need to know about menopause and how it effects your body.  We updated the movie with the newest information and re narrated it with Goldie Hawn in 2016 for the licensing Agreement with PBS for 2016 and 2017.  We are getting emails from people around the country saying how much this information is helping them.  From all accounts, it appears that the fear induced by the release of false information in 2002 by the WHI still has a grasp on women and keeping them from getting the real truth about healthy aging and hormones.

This was a big project and it must have been very personal for you. What was the “aha moment” when you knew you had to make the documentary?

When it took me 3 years and 6 doctors and clinics to try and find out what was wrong with me and each doctor want to prescribe a different medication.  Because I did not have the normal menopause symptoms like Hot Flashes I was going to different kind of doctors for each of my new mysterious symptoms, like joint pain, heart palpitations, bone loss, headaches, anxiousness and depression (never been depressed my life) and my complete mood changes from being happy to very angry (thought I was becoming bi-polar).

I was a completely different women.

So when I finally found the person who could explain what was going on and why women and doctors do not know anything about menopause, I knew I had to do something to make a change and this doctor told me I needed to make a documentary.

It may not be as taboo, but menopause can still be a difficult topic for some. What was your biggest challenge in getting the men and women in the film to open up in such an honest and engaging way?

Women still don’t want to admit they are aging, so they would rather have a lot of horrible symptoms than tell their husband or partner that the need help.  Why do you think there are so many divorces between the ages of 45 to 55?  Men are much more understanding than you know and they really want to help.  Most love their wives very much.

The harder understanding for men is in the workplace.  When women change and become a completely different person, erratic, emotional, hot flashing and shutting down, they usually get fired.  It is costing just the fortune five hundred companies over $350,000,000 in extra medical costs and loss of work for women who do not treat hot flashes (a study done by Yale).

A young woman you interviewed suggested that women don’t learn about menopause until they’re going through it. How can we better educate the next generation so they’re not blindsided by their own menopause symptoms?

Just like puberty and that change, we need to teach high school girls about menopause and that change.  It will especially help them in dealing with their mothers and supporting what they are going through.

When menopause begins in the woman’s life during her 30’s and most symptoms appear in their 40’s, women don’t do anything about it as they do not know it is related to menopause. Instead, they are getting treatments for each symptom and are sometimes on 7 or more medications that they do not need to be on if they had just been treated for menopause and hormonal loss.

Some women facing menopause worry that society—and maybe their significant others—will view them as old and less relevant. What’s the one thing a woman can do in order to avoid falling into that trap?

As Hot Flash Havoc is now airing on PBS stations across the United States, you’ve obviously been very busy spreading the word. But you’re also consulting on Menopause Talks, a video series recently released on Vimeo and available on Amazon. What can you tell us about this series and how you’re involved?

Hot Flash Havoc is only the beginning conversation about menopause.  You can only cover so much in an hour.  This gives women the basic education on menopause and the basic questions that they might need to as their healthcare provider.  However “Menopause Pause Talks” goes further into depth on each subject.  We cover the effects of menopause and aging in depth as if you are having a one hour conversation with some of the most renown doctors in the country to answer women’s questions about the following: