Like many of us in midlife, Sandra Mimran Smith found that her body was changing as she got older. And as a big-chested woman, she struggled to find loungewear that felt good and looked good.

But instead of complaining to her friends, hiding behind baggy sweatshirts or wearing underwires to bed, Sandra made a bold move: she launched Elevé Intimates, a new line of “loungerie” designed to help women look great and feel comfortable.

We had an opportunity to chat with Sandra and find out who inspired her, how she manages so many different roles and what makes Elevé Intimates so unique.

Sandra, it’s always exciting to see women starting new projects in midlife. But in your case, you didn’t just start a new company. You launched an innovative new product and had to juggle manufacturing, technology, marketing and so many other moving parts. What inspired you to take such a big risk at this point in your life?

For me, it wasn’t the risk of making it, but more of the risk of not making it and living with that regret. I always knew that it wasn’t going to be an easy task, especially since I saw firsthand what went into making a quality garment from my mother, who was a seamstress.

Although I had this idea since I was 14, fast forward 40 years later, everything that I knew and how to do it had changed. There have been a lot of learning curves, which have been challenging, but rewarding at the same time.  Even though I was a novice, I made myself understand every aspect of bringing my line to market, because that’s the only way you’ll know how to move forward.

Now you’re running a successful business, but you’re still a wife and a mom. Clearly, you have to wear several hats. How has your family responded and how do they support the new entrepreneur in the house?

My family is the reason I’m not giving up and they understood that sacrifices had to be made.  If there was a time NOT to start a new business, it was when I jumped in: two kids in college, my real estate business was suffering because I was burned out, my husband had a heart attack and his business wasn’t doing as well. But I said it’s now or never and, to date, the biggest validation came when my kids were the first ones to donate to my Kickstarter campaign. It still makes me cry and it also reminds me not to give up!

Everything I made I poured right back into the business. And self-care was crucial, but expensive. So, I got creative and relied on a lot of free Sephora samples, free startup exercise classes, free monthly trials, Rent the Runway when I needed to “look” like I was making millions of dollars. And family time became more precious.

Of all the ways to get a business off the ground, you decided to launch the Kickstarter campaign in 2017 and even surpassed your original goal. It seems like it would be a little scary to put your idea out in the world. How would you describe your frame of mind from the day you started the campaign until you hit your goal?

We all know the saying “Ignorance is Bliss.” Well, bless my heart. I was clueless.  I had a successful trunk show 6 months prior to the Kickstarter campaign and had 30 orders right off the bat, but I was depending on the same people for my campaign. Apparently, double dipping not only applies to chips!  As much as your friends and family want to help you, they also have to relate to your product and understand the need, so that left out almost all the men in my network.

We were hitting a good stride until day 15, when we hit a wall and—after spending two days feeling sorry for myself—I knew that I had to enlist everyone I knew.  I went into warrior mode because failure was NOT an option, especially in such a public forum.  I had to pivot quickly and change my message so that everyone could understand why I needed the money.  I ran Facebook & Instagram ads, direct messaged specific people, highlighted all my donors, so as to egg on more donors. And we did this for 30 days.  It was exhausting and exhilarating at the same time, but now I know what to do on the next go around 🙂

It might not be the most common symptom, but so many women in our menopause forum struggle with increased breast size. In fact, one of our members complained that her “breasts are like shackles” and others openly admit that they just can’t sleep at night. How does Elevé Intimates help women who are desperate for a solution?

Elevé started out of my own need. I developed from an A-DD when I was 14, and I’ve been every size up to a G, so I know their struggle. Our breasts are constantly in flux from puberty right until menopause.

The pattern has seven sewing elements that alleviate many issues, such as built-in support, which helps with soreness while we’re sleeping. And not like a bandage, but a gentle hug. More importantly, it defies gravity, because—let’s be real—if we’re getting bigger during menopause, they’re not as perky. One breast is bigger than the other and some have side boob, aka third boob.  We put a hook and eye and front adjusting straps to make it easier for women to loosen when they sleep. That gives them a boost when they wake up, so they can go about their morning in comfort and confidence, without having to put on a bra.

We all struggle with different symptoms, but I’ve always known that a great piece of clothing can change your mindset. And for many of us, it’s having something that fits, especially at a time when many things aren’t.

Midlife can be complicated. We’re going through so many changes, we don’t always feel as attractive as we did in our twenties, and our bodies tend to sag in all the wrong places. How would you encourage women to come out of hiding and feel better about themselves?

This is tricky, since we’re our own toughest critics and are so hard on ourselves.  Sometimes, I wish we can see ourselves the way our friends and family see us.  The best way to look at it is that it’s going to happen to everyone. You’re not alone. And if there’s a solution, go seek it out.

The reality is that every part of us needs a boost, even our gums, which I’m learning now.  Tackling everything at once never ends well. Start with what bothers you the most and talk to your friends.  Fifty-five million women will go into menopause this year and the market is finally paying attention to us. But we still need to connect.  Approach it as you would on your first day of school: go out, make new friends and be vulnerable. You’ll quickly see how many of us are out there that want to play.

Want to learn more about Sandra and find out if Elevé Intimates are the right fit for you? Visit their website for more information on style, sizes, and more. 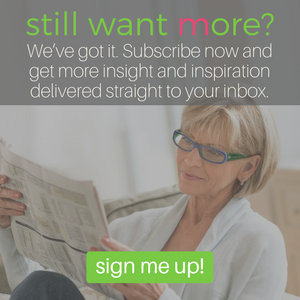